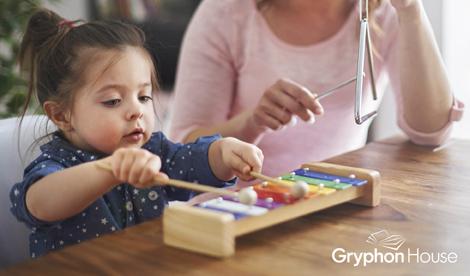 Music is a part of everyday life, but it’s also science! Music activities naturally bring out children’s scientific curiosity and helps develop scientific thinking as they ask questions like: “why do certain instruments make certain noises?” or “what does my heart sound like?” Science activities for kids are a fun way for children to engage in unfamiliar science concepts and build skills like observation and problem-solving. Science activities for preschoolers also encourage children to take a closer look at the world around them and answer help them answer questions.

Brand new and packed with sound science projects, Exploring the Science of Sounds, gives parents and teachers easy science experiment ideas they can try at home or in the classroom.

The Speed and Tempo of a Beach Ball
Tempo is special kind of speed. Every movement has speed, but only movement with a steady beat, or pulse, has tempo.
Tempo is all about the beat. Like the heartbeat, temp is measured in beats per minute. So once again, understanding a musical concept starts with our first musical experience—the heartbeat.  Then you’ll move on to an object that can demonstrate two kinds of speed, both with and without a tempo: a beach ball. Leading this activity is exciting, because you can really see the wheels turning in the children’s minds as they grapple with the problem of how to create a tempo with the beach ball.

Activity to Try
1. Have the beach ball in a closed bag next to you. Ask the children to feel their heartbeats. Lay your right palm flat on your chest, a little left of center. Then, lay your left palm on top to remind them how to feel their heartbeats. If they’re having trouble, you can bring out the stethoscope again—children always love it. After they can fill their heartbeats, they can rest their hands in their laps again.
2. Tell the children that the heartbeat is like the tempo of their body. Tempo is a special kind of speed—it’s the speed of beats. Hearts have a beat and so does the music. But if a movement doesn’t have a beat, it doesn’t have a tempo.
3. Bring out the beach ball. Choose two children sitting across the circle from each other, and have them roll the ball back and forth.
4. Choose two other children and ask them to roll the ball a little faster.
5. Finally, have two children roll the ball to each other very slowly.
6. Tell the children that they rolled the ball at a medium speed, a fast speed, and a slow speed. Every time the ball rolled, it had a certain speed. Ask the children if it had a tempo. Students should be able to tell you that the rolling ball did not have a tempo because it did not have a beat.
7. Ask the class if they can think of any way to make the ball have a tempo. If they’re really stuck, you can lead them by asking, “What can we do with a ball that has a beat?” But give them time to think—sometimes it takes a while for children to realize that bouncing a ball has a beat, which will make it have tempo.
8. When someone suggests bouncing, have them demonstrate bouncing the ball. They may need to move to an uncarpeted area. Then, ask the children if they could hear the beat of the bouncing ball.

The Pitchmobile
Hiding in plain sight (well, inside your kitchen cabinet) is an amazing musical instrument, just sitting there waiting for the concert to begin. Its sounds can be subtle or festively earsplitting, and young children love it. Yes, I’m talking about the aluminum can, the instrument that comes free with every purchase of soup.

Activity to Try
Ahead of Time:
1. Thoroughly wash and dry the cans. The labels usually come off during the washing process, with a little extra scrubbing. When cans are dry, cover the open edge with masking tape. Then use the nail to hammer a hole in the bottom of each can.
2. If the tube has writing on it, you might want to cover it with foil or colored paper.
3. Cut the same number of piece of string, about 18 inches long, as the number of cans. Make a large knot in the end of each piece of string. Then thread the string through the hole in each can until the can is dangling at the end.
4. Wrap the other ends of each string around the rube at regular intervals and tie knots to secure them. You may want to cover these with duct tape for more strength—young children can be pretty tough on instruments! You’ll want the cans far enough apart so you can hear the pitch of each can distinctly as it’s hit.

With the Children:
1. While standing, hold the pitchmobile with one hand at each end and say something like, “This is my pitchmobile. Can you guess why I call it that?” Listen to responses and explain that it has different parts, like a glockenspiel, but it hangs in the air like a mobile.
2. Ask the children if they notice anything about the size of the cans. Children will observe that they’re different sizes. Wonder aloud if the different sizes will make each sound different when it’s played. Listen to the children’s ideas about this.
3. Ask the group how they think we could play it. They may say we could tap on the cans with our hands, or hit the cans with a mallet, or something else entirely. If an idea is possible, let them try it.
4. While one child is playing the pitchmobile, there should be two children, one on each end, facing inward, to hold it up. You can ask the children why it wouldn’t be a good idea for one person to hold it while another person plays. They’ll know it’s because we don’t want anyone to get hit with the cans, or accidentally hit with a mallet. When they’ve heard various ways to play the pitchmobile, let each child have a turn to play it.
5. Then ask the children if they think the cans would sound the same on the floor. Have a child try hitting the cans (carefully) while you hold each can on the floor. The sound won’t be as loud, because your hands are stopping the vibration.

Buzzing Bees
For many children, the sound of a buzzing bee means only one thing—a sting might be coming! It’s good to be careful, but buzzing is also a sign that an interesting and important insect is hard at work. In this activity, children listen to bees, learn about what bees are doing, and enjoy some buzzing and flying of their own.

What You’ll Need
• A bee, if you happen to hear one outside
• Masking tape
• A recording of “bee” music—I suggest “Flight of the Bumblebee” by Rimsky-Korsakov. This old standby really does sound like a buzzing bee, in its sound and in its urgent, racing tempo. There are many versions available, but I like the solo violin version—it’s by far the buzziest.

Activity to Try
This activity will be most effective if you wait until the first time in spring when children hear a bee. That first buzz is exciting and sparks some fears, but curiosity, too. I’ve heard questions like, “Why don’t they just fly away and leave us alone?” and “How do they buzz like that?” What a great opportunity to learn about bees!
1. Begin by asking if anyone knows what bees eat. Some children will say “honey,” because they associate honey with bees. Some will know that bees eat nectar from flowers. Some will know that they also eat pollen. If the children don’t know what these substances are, explain that pollen is that yellow, powdery stuff you see on flowers sometimes, and nectar is a liquid, like juice. Both are actually made by the flowers.
2. Ask the children how they think that baby bees, who can’t fly yet, get their food. Children will realize that the grown-up bees have to bring food to the baby bees. The grown-up bees, called worker bees, have to keep going out of the hive to get pollen and nectar for the babies, who are called larvae. It’s a lot of work because larvae eat more than a thousand meals a day!
3. Ask the children if they can buzz like bees, and listen to the room fill with their energetic buzzing!
4. Point out that we buzzed with our mouths. Ask the children how they think that bees buzz. Some may guess that their wings, moving very fast, create the buzzing sound. Tell them that’s true—bees have to move their wings very fast to fly. That’s the vibration that creates the buzzing sound. Tell the class that they’re going to play a game where they pretend to be worker bees getting pollen and nectar to feed the larvae.
5. Get out the masking tape and make a line down the middle of the circle. Explain that one side of the room will be the hive, and the other side will be the outside, where the flowers are.
6. Ask if anyone would like to pretend to be the larvae—the baby bees. Sometimes there will be eager volunteers for this role, but if not, you can use stuffed animals to be the larvae. All the larvae and worker bees should come over to the hive. The worker bees should be standing. Explain that when you start the music, worker bees should fly out of the hive, moving their “wings” (arms with bent elbows) quickly, and buzzing, to get pollen and nectar for the larvae. Remind them to be careful not to bump into any of the other bees. They should gather a lot of food, because those larvae are always hungry! When the music stops, that’s their signal to come back to the hive and feed the larvae. When the music starts again, it’s time to fly out for more food!
7. Start playing “Flight of the Bumblebee.” Worker bees should fly out, buzzing, and pretend to get food. After a while, pause the music. Worker bees should return to the hive and feed the larvae. Go through this cycle three or four times.
8. After the game, have the children return to their seats.

This Outdoor Activity Will Get Children Excited to Learn 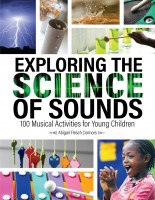 Exploring the Science of Sounds