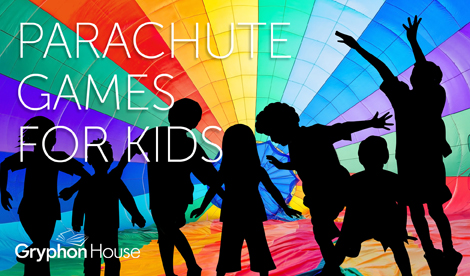 The parachute is a favorite game of children. The bright colors, swishing sound, and active movement make it a fun and exciting experience that sticks in the memories of those who participate. That’s why it’s also a great way for kids to learn! Parachute games encourage physical activity, teamwork, listening and communication skills, and even counting! The simple movements allow it to be tailored to fit any lesson. Want to teach children about physics? Have them rub their hands over the parachute and feel it heat up with friction. Working on simple math? Throw plastic balls into the parachute and practice subtraction when they fly out. There are so many fun possibilities!

Below are five exciting activities your class can do with a parachute! From Clare Beswick’s book 3-2-1: Time for Parachute Fun, these activities teach everything from learning colors, to working together, to how to respond to songs and cheers. They’re perfect for recess or any other type of outdoor learning. Just don’t forget to have fun!

4. Encourage children to suggest their own movements and dinosaurs

Under the Big Top

1. Spread the parachute flat on the floor and have the children stand evenly-spaced around it
2. Ask them to sit and then talk to them about the circus
3. Teach them the rhyme:

It’s going to be a big top day

We’ll have some fun and play away

And when the circus comes today

We’ll learn and read and laugh and play

4. Once the children know the rhyme, have them stand and say it while walking around holding the parachute
5. After they recite it a few times, have the children walk towards that center and pull the parachute over themselves to create their own “big top” 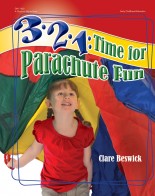