How to Teach Kids about the Presidential Election 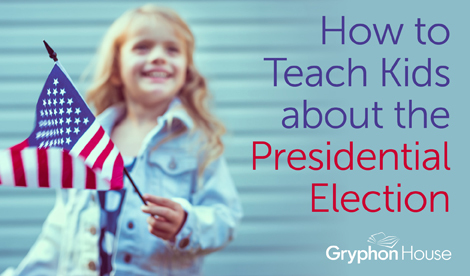 Since the presidential election only comes every four years, Election Day 2016 will be many young children’s first encounter with the United States voting system. No doubt children have already heard all the talk on the news and from adults in their lives, but they may not know what it all means. As November 8th draws closer, parents and teachers can take advantage of this great opportunity to teach children about the importance of elections.

Teaching kids about politics isn’t as difficult as educators might expect it to be. While the actions and policies of candidates may be a bit too much to explain, young children will likely find the basis of the voting process quite magical! The idea of having a voice and making decisions on rules is very appealing to young children who are just beginning to discover their own autonomy. Children may also be excited to learn about something their parents are talking about. On top of that, elections overlap with many areas of study like reading, history, and math, which make it easy to base lessons around. Teachers can dedicate an entire day to an election day for kids! Here are a few suggestions on how best to introduce the idea of elections in an early education classroom:

1. Start with a brief bit of history. You can introduce the role of voting in the country by giving a very brief, very simple history of the United States’ independence from the British. Explain that the nation was once owned by England but left because they wanted to have a say in how their rules were made; so they set up a system that would allow them to decide things as a group.

2. Describe how voting works. Explain how in voting, everybody picks their favorite of two things and writes it down. Once everyone picks, someone else tallies the number of votes for each thing. Whoever has the biggest number of votes wins.

3. Include information about presidential voting specifically. Talk about the role the president has in the country, how the candidates are usually in two groups—(you can say “Democrat and Republican” or simply “a red group and a blue group”)—how each person’s vote is a secret they don’t tell anyone. Describe voting booths and any other things you think might interest the children.

4. Demonstrate. Set up your own election in the classroom. For older elementary age children, the current presidential candidates could be listed on the ballots; however, for younger children, perhaps pick two stuffed animals and have them be your candidates. Have each animal introduce itself with a simple piece of information—e.g. “I’m Wheezy the Weasel and I like flowers”—and then have the children vote on their preferred “candidate”. Voting can be done by ballot or by a show of hands. Then count up the votes and see which one is president of the classroom.

5. Tie it in with academics. To tie in reading and language skills, read the children a book about a president talk to them about it. Ask them questions about why they think the person was elected how the election took place. For math, have the children count and make tally charts of the votes from your classroom election. This introduces concepts of charting as well as ideas of more and less.

6. Remember to keep it neutral. All of us have distinct opinions when it comes to presidential elections, but it’s important not to impose our own political views on students. Regardless of whom you decide to vote for, make sure your classroom activities are fun, lighthearted, and a positive experience for both you and the children.

Voting is such an important part of our culture it’s hard not to get excited about! There’s no better time to introduce the concept than an election year, so gather up your ballot boxes and prepare to teach the future voters on America. And don’t forget to vote yourself!